We are now in Bahrain!

It was an interesting journey to arrive here.  Our flights were all delayed or canceled along the way, beginning in Sioux Falls, South Dakota, where we had a two-hour delay.  This resulted in missing our connection in Chicago.  We were booked on three separate flights out of Chicago. After about a two-hour delay because the cabin of the airplane wouldn’t warm up due to the  faulty external electrical system, we made it to our connection in Washington, D.C.  When we got on that plane, though, we were delayed on the tarmac because of smoke coming out of a vent.  After awhile we were cleared to fly.

When we landed in Kuwait it was determined that there was an oil leak in one of the engines and the plane was grounded.  United Airlines only has one flight a day into Kuwait, and they had no flights the next day (Christmas Day), so we were stranded.  Since there were so many of us who needed an alternate flight, some were able to get onto a flight and some were given a hotel room.  We did not get to the hotel until 1:30 AM and had to return to the airport at 4:30 AM to try and get on a Gulf Air flight to Bahrain.

In this beautiful hotel in Kuwait City we had time for an amazing meal with nine fellow travelers and a shower and then back to the airport.  It turned out that all the morning flights had no room for us, and we didn’t leave Kuwait until 6:30 PM  Christmas day, 24 hours later than our original flight time.

I couldn’t help but wonder what it was like for Mary and Joseph to travel from Nazareth to Bethlehem and then to wind up sleeping in a stable and then have  a baby.  We had nothing to complain about.

The good news is, we arrived in Bahrain at the same time as Maria coming from Seattle.  We were warmly welcomed at the airport by Jim Harrison, pastor at the English Language Congregation, and his son, Jonathon, and Appu Varghese, retiring chaplain at the American Mission Hospital.

When we arrived the country was decorated for National Day with many beautiful lights on the trees and buildings.

We have begun to settle down in our new apartment, and I am looking forward to beginning my work at the American Mission Hospital.

More soon. In the meantime, here are a few pictures from our first few days.

Denise and I will be going “across the water” to Bahrain on Monday, December 23.  We will arrive two hours before the Christmas Eve Service on December 24 and will, if all our flight connections are on time, worship our Lord with our brothers and sisters in Bahrain!

This has been an amazing eight months since Chaplain Appu Varghese spoke at American Reformed Church asking if anyone might hear the call of God to come and serve in Bahrain.  “If God is calling, you cannot say no!” he said.  We said “yes” and our yes to God’s call is coming true!  It has been an amazing journey.

Katie and Maria will be coming with us to see this new place God has called us to.  We are deeply grateful and humbled by all your love and support we have received during this process.  Thank you. 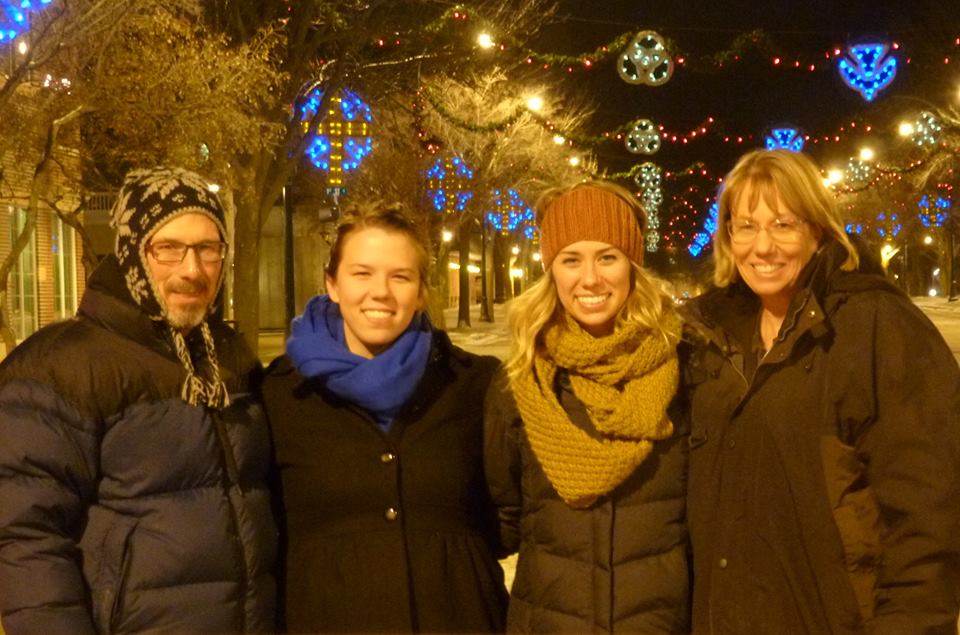 Katie is finishing up a graphic design class in college this semester. She made a Krebs family timeline for a  final project.

I thought it was beautiful. She said I could share it on our blog.

The various trees in her graphic are palms in California, where Keith and I grew up and were married; a ginkgo from our house in Michigan, which we took an annual Father’s Day photo in front of; an orange tree from our house in Glendale, Arizona;  a corn stalk from our backyard in Iowa; and now a new palm representing Bahrain.

At this time of transition, we poignantly think about all the places we’ve lived, all the roots we have put down over the years. The trees Katie chose are a beautiful reminder of these special places.

We are not a giant oak of a family with roots in the same community for generations. We have been a family that has uprooted itself several times. While it’s not always been easy, we can all look back and see that we have grown as a result. We have lifelong friends in each place. In addition, we have left a part of ourselves in each home.  Now, we are saying goodbye and moving once again.

We hope to take our next  family photo very soon in Bahrain.

Maria and Katie with their cousins

We love Arizona. We lived here for ten years from 1994-2004. Our daughters grew up here, and we all have good friends here. We have enjoyed this beautiful week to connect with three churches, including our church home while we lived here.

Churches continue to inspire and bless us with their uplifting prayers, good wishes, and financial support. We couldn’t be doing it without them. Many thanks to our Arizona brothers and sisters.

Our posts have not been coming regularly this past month. We’ve been busy visiting churches in South Dakota, Iowa, and Arizona. Here are a few photos and thoughts from our trip to South Dakota.

One of  the blessings of slightly populated rural South Dakota is that Christians work ecumenically. For instance, in one of the towns, all the churches had the same youth group–Methodist, Lutheran, Roman Catholic, and RCA. When they go to high school, they can invite their friends to the one and only youth group. I thought it seemed kind of like heaven will be.

In another small town, the RCA and CRC churches have come together to worship and work. They are known collectively as The Church in Harrison, but they still use the two buildings–North and South. We arrived 40 minutes before worship was to begin at the deserted South church. We waited about ten minutes, when someone providentially arrived to pick up some music. She informed us that worship was at the North church this morning. Ooops!

It was quiet at the wrong church.

Beautiful organ in the North church in Harrison.

A bountiful harvest in Platte.

We have grown to love rural America.